‘String figures are like stories; they propose and enact patterns for participants to inhabit, somehow, on a vulnerable and wounded earth.’  (Donna Haraway, Staying with the Trouble, 10) 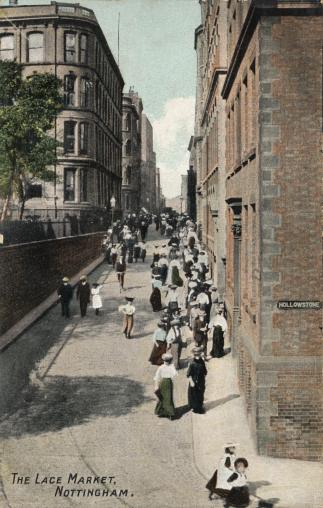 Funded through the University of Nottingham’s Creative and Digital Research Priority Area, the project’s core aim is to explore the potential of immersive, community-led, heritage storytelling as a form of placemaking, what Martin Bashforth et al term ‘socialising heritage / socialising legacy’ (2017 85). The finalised immersive experience was exhibited in situ, in the Lace Market, Nottingham, using an immersive cube, developed by Mission Room Limited.
The two innovative areas of the project are the use of a VR Sprint to develop community-led content for the immersive experience (1st – 2nd December 2018), and the use of an immersive cube for the hosting of the final immersive experience (February 16th 2019). Both elements provide an innovative and unique approach to immersive placemaking and regional heritage VR experiences in the following ways:

(1) the exploration of community-led / participatory immersive placemaking and the ways VR Sprinting might offer an experiential methodology through which individual and collaborative content can be generated. In this way Lace2Place will significantly extend existing participatory heritage projects such as Bashforth et al (2017), Ridge (2014) and Cassidy (2015);

(2) the deepening of our current understanding of the creative affordance offered by immersive technology. Unlike a VR headset, the immersive cube allows 360 degree experiences to be shared concurrently by multiple users. Those within the cube can also handle physical objects; they can refer to material on a second screen such as a mobile phone; and they can talk and performatively interact with other users who are stood in the cube with them.

Alexenberg, M. The Future of Art in a Postdigital Age: From Hellenistic to Hebraic Consciousness. Bristol: Intellect, 2011.